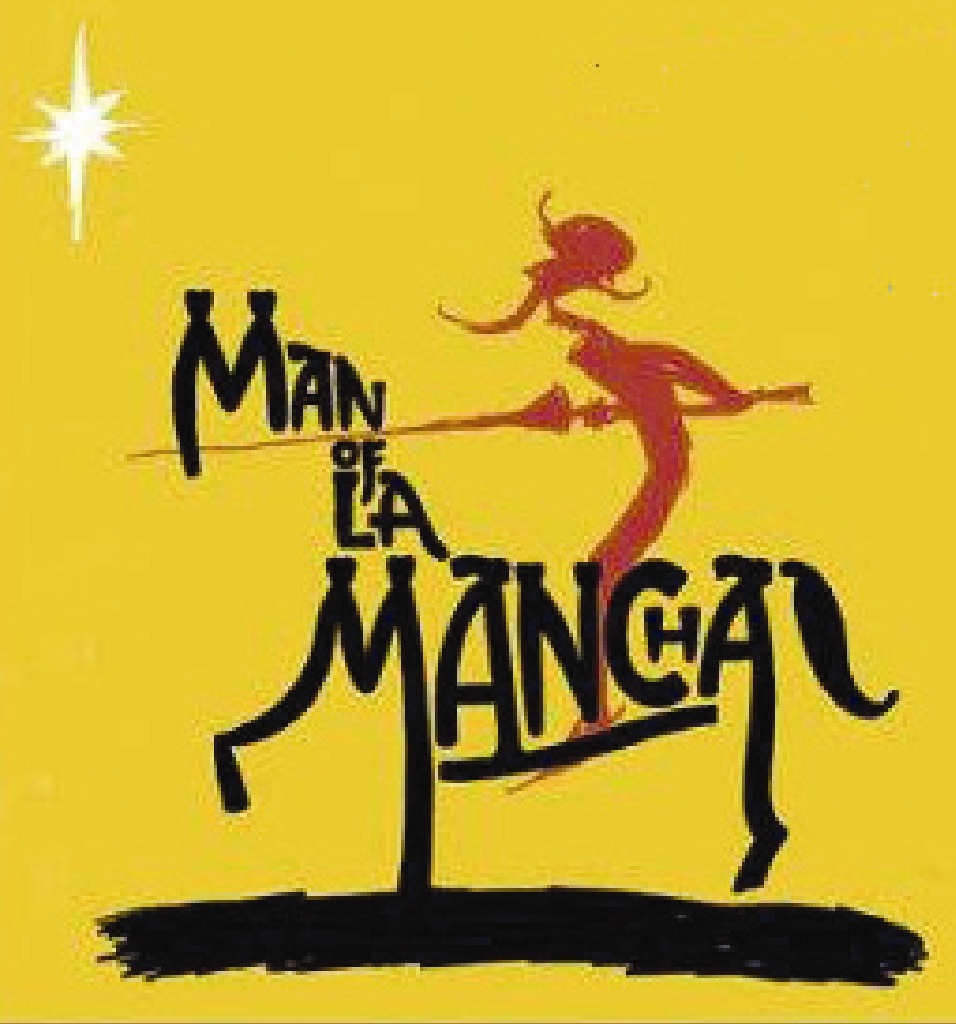 CERVANTES May I set the stage? I shall impersonate a man. Come, enter into my imagination and see him! His name... Alonso Quijana... a country squire, no longer young... bony, hollow-faced... eyes that burn with the fire of inner vision. Being retired, he has much time for books. He studies them from morn to night and often through the night as well. And all he reads oppresses him... fills him with indignation at man's murderous ways toward man. And he conceives the strangest project ever imagined... to become a knight-errant and sally forth into the world to right all wrongs. No longer shall he be plain Alonso Quijana... but a dauntless knight known as - Don Quixote de La Mancha!

DON QUIXOTE Hear me now Oh thou bleak and unbearable world, Thou art base and debauched as can be; And a knight with his banners all bravely unfurled Now hurls down his gauntlet to thee! I am I, Don Quixote, The Lord of La Mancha, ? My destiny calls and I go, And the wild winds of fortune Will carry me onward, Oh whithersoever they blow. Whithersoever they blow, Onward to glory I go!

DON QUIXOTE Hear me, heathens and wizards And serpents of sin! All your dastardly doings are past, For a holy endeavor is now to begin And virtue shall triumph at last!

DON QUIXOTE I am I, Don Quixote, The Lord of la Mancha, My destiny calls and I go, And the wild winds of fortune Will carry me onward, Oh whithersoever they blow!

DON QUIXOTE, SANCHO Whithersoever they blow, Onward to glory I {we} go!

It's all the same

Oh, I have seen too many beds, But I have known too little rest, And I have loved too many men With hatred burning in my breast. I do not like you or your brother, I do not like the life I live, But I am me, I am Aldonza. And what I give, I choose to give. One pair of arms is like another It's all the same, it's all the same!

I have dreamed thee too long, Never seen thee or touched thee. But known thee with all of my heart. Half a prayer, half a song, Thou hast always been with me, Though we have been always apart.

If I reach out to thee, Do not tremble and shrink From the touch of my hand on thy hair. Let my fingers but see Thou art warm and alive, And no phantom to fade in the air.

Now I've found thee, And the world shall know thy glory, Dulcinea... Dulcinea!

I'm only thinking of him

I've been, told he's chasing dragons And I fear it may be true If my groom should hear about it. Heaven knows what he will do! Oh, I deadly love my uncle, But for what he's done to me, I would like to take and lock him up And throw away the key! But if I do... but if I do... There is one thing That I swear will still be true...

I'm only thinking and worrying about him. I understand.

PADRE I know, I know, my dear; Of course you are, my dear; I understand.

SANCHO I like him, I really like him. Tear out my fingernails one by one, I like him! I don't have a very good reason, Since I've been with him, Cuckoo-nuts have been in season... But there's nothing I can do, Chop me up for onion stew, Still I'll yell to the sky Though I can't tell you why, That I like him!

ALDONZA But, what do you get out of it?

ALDONZA You've got nothing! Why do you do it?

SANCHO I like him, I really like him. Pluck me naked as a scalded chicken, I like him! Don't ask me for why or wherefore, 'Cause I don't have a single good "Because" or "therefore!" You can barbecue my nose. Make a giblet of my toes, Make me freeze, make me fry. Make me sigh, make me cry. Still I'll yell to the sky, Though I can't tell you why. That I like him!

What do you want of me

Doesn't he know He'll be laughed at wherever he'll go? And why I'm not laughing myself... I don't know.

BARBERO Oh, I am a little barber And I go my merry way With my razor and my leeches I can always earn my pay

Though your chin be smooth as satin, You will need me soon I know For the Lord protects his barbers, And He makes the stubble grow.

If I slip when I am shaving you And cut you to the quick, You can use me as a doctor 'Cause I also heal the sick.

BARBERO But this is a shaving basin!

DON QUIXOTE Shaving basin! Know thou not what this really is? The Golden Helmet of Mambrino! When worn by one of noble heart, it renders him invulnerable to all wounds! (to the Barber whacking the barrel with his sword) Hand it over!

BARBERO I can hear the cuckoo singing In the cuckooberry tree...

SANCHO If he says that that's a helmet, I suggest that you agree...

BARBERO But he'll find it is not gold And will not make him bold and brave...

SANCHO Well, at least he'll find it useful If he ever needs a shave!

DON QUIXOTE Thou Golden Helmet of Mambrino, Thy deeds the world will not forget, Now Don Quixote de La Mancha, Will bring thee greater glory yet!

DON QUIXOTE, BARBERO, SANCHO, MULEROS Golden Helmet of Mambrino There can be no hat like thee.

DON QUIXOTE Thou and I now, ere I die now, Will make golden history!

To each his Dulcinea

PADRE To each his Dulcinea That he alone can name... To each a secret hiding place Where he can find the haunting face To light his secret flame. For with his Dulcinea Beside him so to stand, A man can do quite anything, Outfly the bird upon the wing, Hold moonlight in his hand. Yet if you build your life on dreams It's prudent to recall, A man with moonlight in his hand Has nothing there at all. There is no Dulcinea, She's made of flame and air, And yet how lovely life would seem If ev'ry man could weave a dream To keep him from despair. To each his Dulcinea... Though she's naught but flame and air!

DON QUIXOTE It is the mission of each true knight... His duty... nay, his privilege! To dream the impossible dream, To fight the unbeatable foe, To bear with unbearable sorrow To run where the brave dare not go; To right the unrightable wrong.

To love, pure and chaste, from afar, To try, when your arms are too weary, To reach the unreachable star!

This is my Quest to follow that star, No matter how hopeless, no matter how far, To fight for the right Without question or pause, To be willing to march into hell For a heavenly cause!

And I know, if I'll only be true To this glorious Quest, That my heart will lie peaceful and calm When I'm laid to my rest.

And the world will be better for this, That one man, scorned and covered with scars, Still strove, with his last ounce of courage, To reach the unreachable stars!

POSADERO Don Quixote de La Mancha, Having proved yourself this day In glorious and terrible combat, And by my authority as lord of this castle... I hereby dub thee knight!

DON QUIXOTE But, your Lordship...

POSADERO Didn't I do it right?

DON QUIXOTE If Your Lordship could make some mention of the deeds I performed to earn this honor...?

DON QUIXOTE And it is customary to grant the new knight an added name. If Your Lordship could devise such a name for me...?

Knight of the Woeful

Farewell and good cheer Oh my brave cavalier Ride onward to glorious strife. I swear when you're gone I'll remember you well For all of the rest of my life.

ALDONZA I am not your lady!... I am not any kind of a lady! I was spawned in a ditch By a mother who left me there, Naked and cold and too hungry to cry; I never blamed her. I'm sure she left hoping That I'd have the good sense to die! Then, of course, there's my father... I'm told that young ladies Can point to their fathers With maidenly pride; Mine was some regiment Here for an hour, I can't even tell you which side! So of course I became, As befitted my delicate birth, The most casual bride Of the murdering scum of the earth!

DON QUIXOTE And still thou art my lady.

ALDONZA And still he torments me! How should I be a lady? For a lady has modest and maidenly airs, And a virtue I somehow suspect that I lack; It's hard to remember these maidenly airs In a stable laid flat on your back! Won't you look at me, look at me, God, won't you look at me! Look at the kitchen slut reeking with sweat! Born on a dung heap to die on a dung heap, A strumpet men use and forget! If you feel that you see me Not quite at my virginal best, Cross my palm with a coin, And I'll willingly show you the rest!

ALDONZA Take the clouds from your eyes and see me as I really am!

You have shown me the sky, But what good is the sky To a creature who'll never Do better than crawl?

Of all the cruel bastards Who've badgered and battered me, You are the cruelest of all! Can't you see what your gentle Insanities do to me? Rob me of anger and give me despair! Blows and abuse I can take and give back again, Tenderness I cannot bear! So please torture me now With your "Sweet Dulcineas" no more! I am no one! I'm nothing! I'm only Aldonza the whore!

DON QUIXOTE Now and forever thou art my lady Dulcinea!

SANCHO Your Reverence, could I talk to him?

SANCHO (moving toward the bed) Then, I won't say much.

PADRE And no mention of knight-errantry!

SANCHO Of course not. Does one speak of the rope in the house of the hanged? Just a few words... to lighten his heart.

A little gossip... a little chat... A tittle idle talk of this and that... I'll tell him all the troubles I have had, And since he doesn't hear, At least he won't feel bad.

When I first got home my wife Teresa beat me, But the blows fell very lightly on my back. She kept missing ev'ry other stroke And crying from the heart That while I was gone She'd gone and lost the knack! Of course, I hit her back, Your Grace, but she's a lot harder than I am, and you know what they say... "Whether the stone hits the pitcher or the pitcher hits the stone it's going to be bad for the pitcher" So I've got bruises from here to...

A little gossip... a little chat... A little idle talk of this and that... If no one listens, Then it's just as well, At least I won't get caught in any lies I tell!

Oh, I haven't fought a windmill in a fortnight And the humble joys get duller ev'ry day, Why, when I'm asleep a dragon With his fiery tongue a-waggin' Whispers, "Sancho. Won't you please come out and play?"